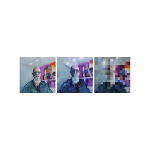 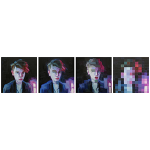 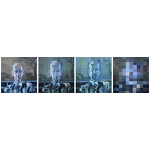 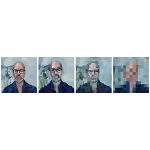 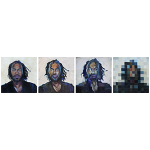 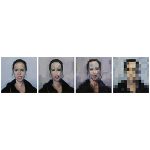 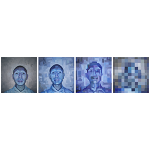 “A sound installation by Simon Fisher Turner accompanies the visual elements of Feedbackloop. To create the piece Fisher Turner recorded the noises of the Kopp?s studio while sitting for a portrait ? the swish and click of the brushes, the rummaging sounds associated with looking for a particular tube of paint, the percussion of the palette-knives, snatches of conversation. He then looped and layered these sounds, stretching and compressing elements into a composition which creates a sonic environ- ment that complements the paintings both aesthetically and conceptually.

Simon Fisher Turner is renowned for his film soundtrack work which began with Derek Jarman for whom he scored many feature films, from Caravaggio (1986), through to Jarman?s final work Blue (1993). Caravaggio (1986) was the first film in a long relationship with the BFI which most recently has seen him compose the score for restorations of two silent films, Un Chant D?Amour by Jean Genet (1950) and The Great White Silence by Herbert Ponting (1924) which premiered at the 2010 BFI London Film Festival and was awarded Best Archive Restoration at the Focal International Awards in 2011. He won the Ivor Novello Award for ?best film soundtrack 2013 for the Epic of Everest.

With a career as varied and diverse as his current projects, Simon Fisher Turner began as an actor in Tom Brown?s Schooldays, and in between then and now has released records as The King Of Luxembourg and Deux Filles. His collaborations have most recently have seen him performing live at the ICA with Factory Floor as part of their Artists In Residency and at the Roundhouse with the artists Ashley Paul and Nik Colk Void (Factory Floor / Carter Tutti Void) as part of The Pace Of Time festival. Earlier this year?he participated in Ryuichi Sakamoto and Tomoyasu Hirano?s Kizuna project, a collection of artists? works raising funds for the organisations dealing with the recent natural and manmade disasters in Japan http://kizunaworld.org and the premiere of Chroma ? his collaboration with Shiro Takatani, which recently premiered at the Festival de Marseille.

Forthcoming works include collaborations with Atom Eye ? with whom Turner collaborated on The Otolith Sessions ? and with Rainier Lericolais for his new album; The Seasons in Quincy a series of Films about John Berger by Tilda Swinton and other film-makers of the Derek Jarman Lab; His ongoing personal work as DEADMENCANTRUN ? a sound project based in the Middle East and North Africa; And?a new LP for Mute Records and a new Deux Filles LP released in February on Les Disque De Crepescule.”